friday was Ahjima's bday party. i was exhausted all day as well as very very broke but i was a trooper! i went home & took a giant nap after work & then headed over to Ahjima's before we all went to 230 Fifth together. of course, having gone home & napped instead of eating dinner made for a very interesting night out.

the best thing about 230 Fifth is its rooftop. honestly it's amazing to see the view surrounding you on all sides of the building. luckily friday night was beautiful weather, not too muggy but still very warm and nice. Debs got there before us and it was hilarity to try and find each other on that crowded rooftop. our text messages and phone calls kept saying "i'm by the bar.where are you?"; "I'M by the bar.WHERE are you?" etc.

after locating most of our party, Ahjima's oppa Gohm began to try and locate a table for all of us which was no easy task. he finally managed to secure one but had to purchase 2 bottles in order to get it. i heard later that the total bill for him came to about $800. i've gotta pitch in but $60 for a single vodka & cranberry? me & Goh 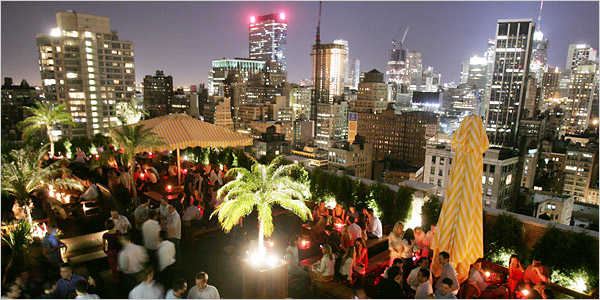 m will have to negotiate.

i remember sitting w/Debs at the table & talking then sitting & talking w/Gohm for a bit. Debs got ready to leave & i walked w/her where she subsequently ran into some guys she had met prior to our arrival. she walked away w/him & i got left w/his awkward friend so i departed too. there was a whole bathroom debacle where i was messy enough that a very nice bodyguard was my private escort to the bathroom & then the rest of the night is a blank.

all i know is i woke up the next morning in my own apartment in my own pajamas w/no visible scars/trauma marks. interesting... i called Ahjima to see if she could fill in the blanks but she had no idea what happened to me & Debs had already left by then. it's a complete mystery. however, Ahjima did comment that she was very impressed that i made it all the way back to Hoboken in the state i was in. i think i'm impressed too.
Posted by tma at 3:43 PM