HungryHungryHippo and i differ in a lot of respects.  from our outer shape, size, and looks [i am a marshmallowish mid-height "pleasantly plump" asian; she is under 5 ft, super skinny, and looks like a 12 year old] to our personal tastes in music, clothes, and style. there are 2 things we do share though: an appetite for food and a desire to get out of the thumb of our domineering and overbearing Chinese mother.

i've learned a better coping mechanism than TripleH, but that's something that's learned with time (aka patience and understanding). TripleH is only 18 years old, so she's still got a big learning curve to hurdle.


what's interesting is that although TripleH wants to get away as fast as she can from our home in NJ, she's never been too keen on getting into NYC. when i was in high school and college, i thought the entire world revolved around Manhattan. i would try to go into the City every chance i got-which wasn't very often, protective Chinese mother and all. she always thought i would be kidnapped and sold on the black market. i wondered if TripleH's lack of interest in the City was a result of lack of exposure.

so for TripleH's 18th birthday i decided to take her into the City. granted, we're too far apart in age for me to be "ok" with sneaking her into her first bar or taking her to buy cigs or a baggie which i guess would've made me significantly "cooler," but i'm fine with not being "cool." it's such a relative term anyway. instead i took TripleH to Cocoron for some "heartwarming" Japanese food.  Cocoron means "heartwarming" in japanese, and the small, intimate restaurant setting and the simple but delicious food all convey that sentiment. 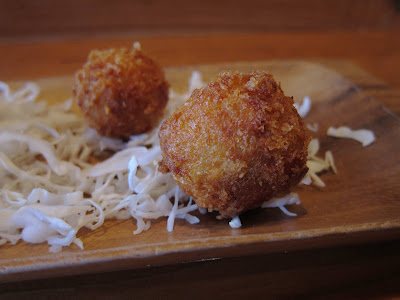 we chose the Kyona Salad ($5) and the Pork and Okara Croquette ($3.50) as appetizers. since we sat at bar seating, we got to watch the chef make all our food. while not the prettiest kitchen set-up, the ends truly justifies the means in their kitchen. the salad was super light and topped with raw quail egg and what tasted like ponzu. the croquettes were piping hot when served, freshly fried and delightful, crispy little balls of whipped potatoes with ground pork. the okra was not too prevalent in the taste but i'll take their word that they were in there.﻿
for entrees, TripleH opted for the Pork Kimchee Soba ($9 when we went; now the website says $9.80) and i went for the classic Stamina Soba ($8 when we went; now $8.80). both of got them tsukemen style which means the soba is served cold on a woven plate next to a small nabe pot on a burner filled soup to dip the soba noodles in.  you swirl the noodles in the hot soup for 4-6 seconds and then munch away. i was a bigger fan of TripleH's Pork Kimchee Soba than of the Stamina Soba, but that might just be because i'm a big fan of kimchee. btws, look how ginormous the spoon they give you is!

when you're done with the soba, the server comes around with a teapot of hot water to dilute the soup. if you attempt to drink the soup before you dilute it, get ready for a giant salt-fest. patience, grasshopper.

as a dessert, TripleH ordered the mochi ice cream ($5.50). i can't remember exactly what flavor it was: green tea? peanut? but she liked it.

in addition to her mochi dessert, i also took her over to Doughnut Plant for some non-traditional donuts. the Creme Brulee donut was to die for. it had the perfect crusty, hard glaze exactly like real creme brulee.
Posted by tma at 9:57 AM

Wow! Your photos are great, everything looks so good! Thanks so much for sharing. You have a wonderful site, I am now following =]