after ushering in the year of 2012, i found myself in the predicament of needing to shop for a new planner. but not just any planner.  yes, i'm an attorney, and yes, i have an Outlook calendar packed with court appearances, deposition dates, and filing deadlines. but my own personal planner is decidedly less... serious. after making a few alternate stops, i found myself at Kinokuniya Book Store near Bryant Park.  going to their downstairs/basement, i found myself in Japanese stationery heaven surrounded by colored pens and Hello Kitty planners. and that's how i ended up with this. say hello to 2012!

after making my purchase, i hunkered down (or up) at Cafe Zaiya located on the 2nd floor of Kinokuniya with my laptop to do some much needed work (yes, on a Saturday. not fun, but very necessary). sitting at the countertop, i got to enjoy a great view of Bryant Park while i summarized depositions.

however, my single cup of coffee was not doing a good job of curbing my hunger. and sitting there in Cafe Zaiya with all the delicious looking bento boxes and sandwiches was not making it any easier. but i had plans that night for dinner and didn't want to go ruining my appetite. if i had thought it out better i would have eaten something that morning/lunch. but at this point, it was rounding out to 4:00 pm and i had dinner plans at 7:00 pm. argh that middle hunger point!

somehow, i managed to wait it out and met ArrangedMarriage for dinner at Curry-Ya.  i was in a japanese-curry-kind-of-mood and had heard good things about it.  the place is tiny but the curry and variations are fantastic. and quick.  AM ordered the Hamburg Stew ($12) while i ordered the Berkshire Pork Cutlet Curry ($13). sitting at the counter facing the kitchen, we watched as they fried my tonkatsu and cooked his hamburg and heated our curries in small cast iron pots on the stove. quicker than you can say, "mmm, that looks good," our food was placed in front of us with a plate of white rice. and even quicker is how fast you can eat all that piping hot, delicious food. within 20 mins (in which we spoke very few words), we had eaten our plates clean. 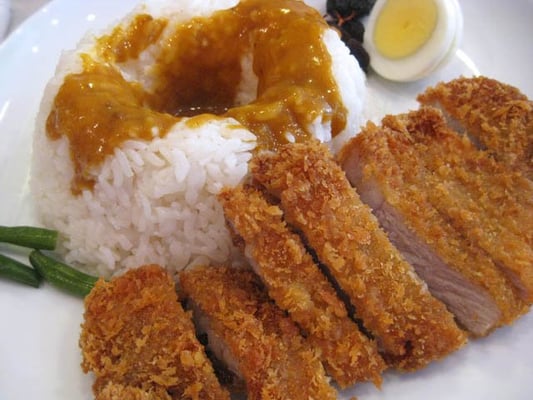 sated by the japanese curry, we moved on to Village Yokocho for drinks and bar snacks. since we were simply looking for a good place to hunker down for drinks, i almost suggested Angel's Share, but one look at the wait time made me forego that option and since Village Yokocho had no wait, it just seemed easier. we stayed for a couple of hours, in which i was once again tested to the full extent of my conversational arsenal while i tried to avoid the awkward silences that AM is so adept at.
once we got the check, i got ready to call it a night, except AM suggested grabbing another drink at Bar Veloce.  it was still relatively early and Bar Veloce was practically across the street from our location, so i felt obliged to continue on.  really, i should have known better.
up until this moment, it had been an "ok" evening and AM was less awkward than he usually is. however, upon arriving at Bar Veloce, which was pretty crowded for a wine bar, things took an eventual downturn as AM got quieter and quieter and i had completely exhausted my conversational skills/topics. however, it was at this moment that AM thought it would be the right time to ask if "we should start dating, you know, officially."
my response? "....................................................................."
i don't mind going out together, or even going on dates, but i don't like to use the word "dating" unless i am ready for someone to be my boyfriend/exclusive. which is exactly what i told AM. now, AM's a good guy, a little awkward socially, but he has a respectable job and is an all-around nice guy. maybe not sweep-you-off-your-feet, but nothing horrible either. however, there is 1 key hurdle that stands in the way of me dating AM. and perhaps i shouldn't have said it, but i was  starting to get a little frustrated with the extensive silent treatment i'd gotten during our 30+ mins at Bar Veloce, so i told AM the truth:
"i just can't imagine sleeping with you. and that's pretty important."
was that too harsh?
Posted by tma at 10:29 AM