moving into my new apartment in Brooklyn Heights has not been an easy task. i forgot how much stuff i'd accumulated (essentially all crap) and moving my new IKEA furniture was no easy feat either (especially with no elevator and a 2 floor walk-up).  thankfully i had Kiddo and D-Life to help me out with all my junk.

on Friday night, Kiddo met with me at my new apartment to help me move in half of my stuff (D-Life would meet me next day to move in the rest). i had been running late so Kiddo had been waiting for me at the local bar around the corner from my apartment. i was much later than i expected so i couldn't blame Kiddo when he arrived and advised me he had drank a (small) pitcher of whiskey while waiting for me.

it turned out the alcohol was a good thing because Kiddo used brute, drunken strength to single-handedly carry up all my IKEA furniture (and that shit ain't light). hooray for alcohol strength!

as a thank you, i took Kiddo out for dinner. since i haven't been in the BK Heights in a while, i deferred to Kiddo when he suggested two8two. i'm as big a fan of a burger as the next guy, but i haven't really jumped onto this whole "gourmet burger" trend. or so i thought at the time...

two8two wasn't very packed on that particular friday night. just enough people to make it seem like it was doing some decent business, but not overcrowded or loud.* Kiddo and i ordered the Breakfast Burger ($9) which consists of a burger topped with a fried egg, cheddar cheese, bacon, and two8two sauce. so good. the burger was cooked exactly how i asked for (medium rare) and they were really quick from the time i ordered to when i received my food. my younger cousin, Woof2, ordered the Billy Burger ($7.50), a burger with grilled onions, cheddar cheese, and two8two sauce. she wolfed the burger down and still talks about it to this day. she recently confessed that she had wanted to order another burger that night, but since it was her first time meeting Kiddo, she hadn't wanted to scare him. 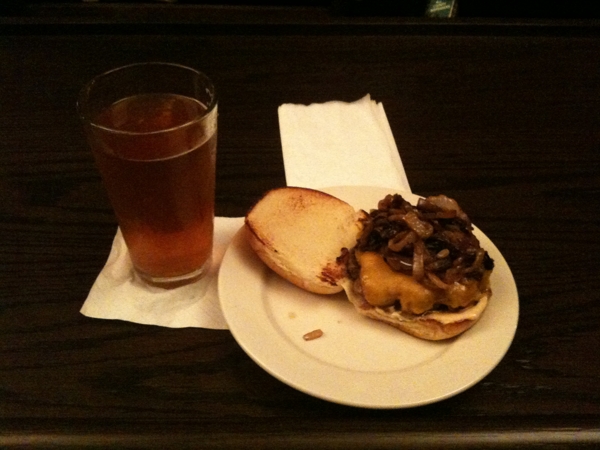 In addition to the burgers, we ordered a side of French Fries ($3) and Greek Fries ($4) (fries topped with feta cheese and oregano). honestly, i preferred the regular fries over the Greek Fries. The feta was never really melty since it's applied after the fries are cooked. it still tastes fine, but since it wasn't what i was expecting, i just wasn't as big a fan.

the menu at two8two isn't that expansive, but they do make some decent cocktails. i ordered their Chipotle Habanero Bloody Mary ($9). make sure to ask for bacon salt on the rim. although not a big order, it's pretty tasty. i like bloody marys that aren't too strong in vodka, but have some spicy kick. 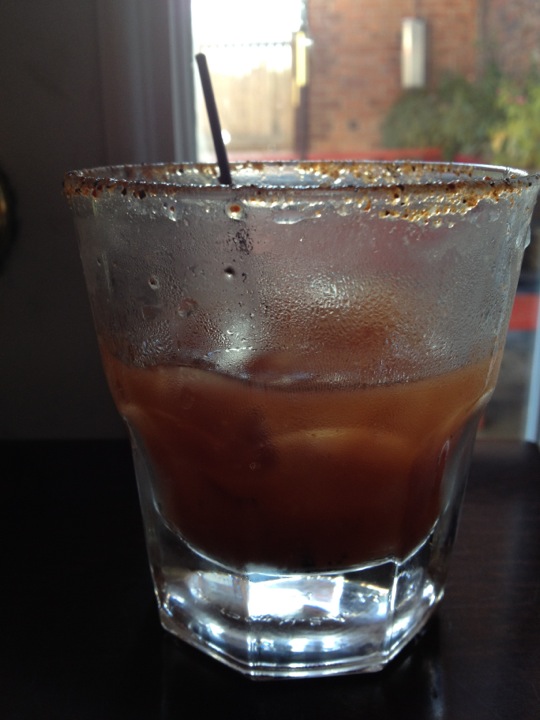 a few days later, i found myself at another new burger joint in BK Heights: Moo Burger. a little pricier than two8two but with a lot more choices and interesting menu items. the menu itself is actually a little tricky and confusing. for instance, The Smokehouse ($14) is described as pulled pork, onion ring, chipotle barbecue sauce and coleslaw. which left us scratching our heads: did this "burger" actually come with a burger patty or was it just straight pork? a quick inquiry with our waitress revealed that it was pulled pork, etc. on top of a hamburger patty. whoa, mind-blown. but then, when we inquired about The Buffalo Chicken ($13) (spicy buffalo sauce, carrots, celery, bleu cheese), we were advised that it didn't actually come with chicken, just the accoutrements of a buffalo chicken sandwich substituting a burger patty for the chicken. congrats Moo Burger, you've got me a little puzzled.

after thoroughly annoying our waitress with my incessant and ridiculous question, i still hadn't decided on what i wanted to eat. i had only just moved into my new apartment and had been pretty much eating out everyday. i was feeling a little unhealthy and a lot gross. initially when Egg and She, now my neighbors (!) had asked to go out to dinner, i'd indicated i wanted to go a veggie-healthy way. so they suggested Moo Burger since they knew that it had some salad options as well. of course, that all flew out the window once i saw their intriguing menu. in a moment of evil-genius-frankenstein-madness, i decided to ask whether i could order The Moo-Less ($12) with a burger patty.

the whole inquiry process was a little amusing. when our waitress came back (for the 3rd or 4th time) to take our order, i had to ask a seemingly straightforward question: did the Moo-Less come with a burger? i'll give her props for being good-natured throughout this whole process, but she did sort of roll her eyes and added a slight sarcastic tone when she stated, "No. Moo-Less? Get it?" but you can't blame me for being a little confused (see above paragraphs). so i asked whether i could order the Moo-Less but with a burger and how much that would cost. she came back and advised it would be $14 to order the Moo-Less with a burger patty**. done and done.  Kiddo followed suit and ordered the same thing.

when the burger arrived, it was a monster. a burger patty topped with portabello, zucchini, squash, eggplant, roasted red pepper, pesto and tapenade. oh my! the burger was perfectly cooked and all the veggies and sauce made it savory and sweet at the same time. it's definitely a little messy to eat, so be prepared.  the pesto and tapenade, along with burger juices, makes the bottom of the sandwich get a little soggy over time. so if you're eating with your hands, be prepared for some sticky fingers. Kiddo also ordered a side of fries (which were delish-skinny shoe string fries that were nice and crispy) while i ordered a side of coleslaw (again trying to be healthy-but unless you like watery coleslaw, i'd skip this option).

*i recently went back and the place was packed. and due to the wooden decor of the restaurant, it is not amenable to noise control. this particular night there were 2 large parties of 6+ and it was impossible to hear anyone at my table talk.