phew. all trashiness depleted for the moment.

haven't embarked on a Restaurant Week in a while due to complete lack of funds, but finally did and can't think of a better way to kick it off. GI has migrated back to the East Coast after having moved out to Cali for the past few years. GI and i met when we were both studying abroad in Edinburgh, Scotland, and, as it so happened, both of us were dating people when our friendship developed. in turn, there was never a sexually tense moment between us and, somehow, it's managed to stay that way throughout these 7 years we've known each other. i guess the fact that he was in Chicago and i was in Northampton helped. and then the fact that he moved to Cali and i was in NJ/NY also helped. but i've been in similar situations and something still happened so i'd like to think it's more than that with GI.

GI and i hadn't been able to meet up since his move to the east, and he's been here for a few months already so it was great that we could finally coordinate something between the 2 of us. we ended up deciding to eat at Rayuela, which i've always been interested to eat at since i hear good things, and also because they were offering an interesting Restaurant Week menu.

of course, on the date of our dinner, the weather was sweltering. by the time i got to the restaurant i was drenched in sweat. it was not pretty (or you could say it was really pretty-pretty gross). i arrived early so i grabbed a seat at the bar and lamented the fact that, even with the front door closed, the restaurant was still warm. a tall glass of ice water remedied that situation.

GI and i got a prime seat near the front of the restaurant but at the corner booth, which was really nice. the only drawback was when our waitress came over with a small towel wrapped on a stick. why, you ask? because the sweltering heat was making the A/C work overtime, which resulted on it sweating down on diners who were sitting underneath it. i really appreciated that they were coming around to wipe the A/C sweat so it didn't rain down on me, but then, after that initial wipe, they never came back! it only rained on me once, and i just scooted to the right a little and avoided any more mishaps.

Rayuela is not a bad date option, but it also serves just as good for a friendly-dinner option. the ambience is chic but not pretentiously so (yes, the tree in the middle of the room that grows up towards the 2nd floor is very cool) and the lighting is just dim enough that it could be romantic, but not pitch black so it doesn't feel weird if you're not on a date-date. GI commented he was surprised to see such a fine-dining-esque restaurant in this location, but i'm not surprised at NYC anymore and i truly believe the sectioning off of neighborhoods and types is growing blurrier and blurrier every day.

just to prove that great minds think alike, GI and i ordered the exact same menu, except for the dessert (which we split) and our choice of wine-pairings, which is only an extra $15 so i highly recommend-although i could skip the dessert wine. blech too sweet. 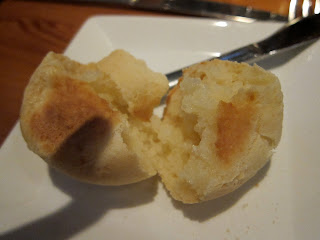 the amuse of gazpacho was a nice start and more than a shot glass's worth, which is always appreciated. sometimes i'm a fan of gazpacho, other times i'm not. because it was so hot outside, the gazpach was very welcome and refreshing. We both ordered the Carpaccio de Corvina & Calamari Ceviche. i'm a total sucker for ceviches so i was really looking forward to this, but it ended up tasting a little bland, which threw me off since ceviche usually entails a strong acidic/citrusy flavor. and the corvine did not taste like carpaccio but instead had the taste and texture of cooked fish. however, the sweet potato croquette was piping hot, crunchy on the outside but soft and starchy on the inside=totes delish.

As entrees we had the Piramide de Carne which is beef, duck, AND pork in a single dish. i had been torn between ordering this or the lamb or the swordfish but this completely paid off. although the portion looked "eh", the density of all those meats and a side of rice=completely filling. the poached egg was perfectly poached (something i wish i could do myself) and i broke it over my rice and swooped up any extra yummy yolk with my 3 meats. for dessert, GI and diverged so that we could get a taste of both offerings. the Pastel Rojo=red velvet cake with typical white frosting. i like red velvet cake, don't get me wrong. but is that really latin american fare? the Natilla de Chocolate had so much potential but it was starting to melt by the time it got to our table and within 4 bites was a soupy mess.

overall i thought the meal was great, sans dessert, but honestly, by that time i was pretty full anyway.

yesterday i got a call from the NYC Department of Health. apparently somebody reported getting sick after eating at Rayuela on the same night GI and i did. i'm not sure what they ate or what happened but i just want to reiterate: GI and i were perfectly healthy after our meal. the only thing we left Rayuela with was a case of food satisfaction.