as fleeting as a firework 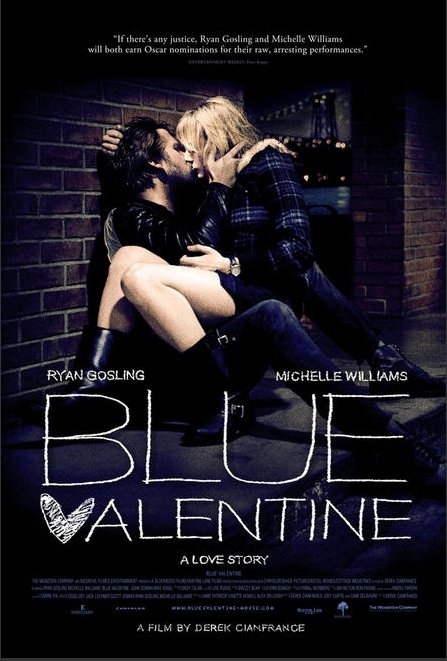 i just finished watching Blue Valentine. and it was epic.
i admit i'm not much of an intellectual movie watcher. i tend to like the more formulaic main-stream type of movies. i'm a big rom-com fan. i have never been able to get myself to finish watching The Wrestler. Mickey Rourke is just so sad-looking in the movie i can't bear to watch it.
but every once in a while, i get tricked into watching a smart indie film and actual love it. that happened when i saw Children of Men. i thought the story was so intelligent and so well presented. it was definitely the type of film that made my brain continue churning and thinking about the subject matter, as well as the film itself. and after watching Blue Valentine, i have the same feeling.
admittedly, i initially was intrigued by the notorious scene that got the movie initially labeled with an NC-17 rating. and Ryan Gosling, of course. i mean, i love him as much as i love JGL. or Topher Grace. yep, he falls in my 5 i would say. correction, he is most definitely in my 5.
if you haven't seen it yet, i highly recommend watching the film. and while Ryan's looking good in 50% of the film, he's a lot less good-looking in the other 50% of the film, so if you're looking for eye candy, i'd wait for The Ides of March when it comes out. that will have Ryan and George Clooney. the physical transformation of Ryan Gosling in Blue Valentine is sort of impressive in itself. it's only a little weight and a receding, thinning hairline, but, coupled with his white-trash-like character, it's an effective turn-off. congratulations Director Derek Cianfrance, you managed to make Ryan Gosling unattractive. a feat i once thought impossible.
the movie's an extremely effective juxtaposition of the best and worst in a relationship. the scenes depicting the fall and ruin of the relationship is interspersed with scenes of the beginning and development as well. and it's truly heartbreaking. the scenes where love is clearly growing between the two made me smile as a reminder of a similar memory in my past experiences (not the accidental pregnancy if that's what you were thinking) and envious of the younger Ryan that was immediately smitten with the younger Michelle Williams. and of course i was jealous that Michelle Williams got such a hot Ryan Gosling. even if it is only in the movie (although rumors are flying that life is imitating art, which wouldn't be the first time for Ryan-yes, we're close enough that we're on first-name bases).
but the relationship between the adult Ryan and the adult Michelle was cringe-worthy and uncomfortable, as it was meant to be. it's clearly headed for disaster, and you know that if the couple doesn't break up, they'll only be together because they're stuck with each other, not because they want to be. the conversations and other relationships, represented by Michelle's parents, demonstrate how relationships end up being about "settling" or become some sort of miserable existence.
it's a sad sad reality that Blue Valentine depicts. and what's worse is, it doesn't feel false. in fact, it rings unsettlingly true.
but even if that's the case, and even though you now know that the movie depicts this tragic truth (if you didn't already), the way the story's told and the way the actors portray it, won't stop you from rooting for their younger selves. and it won't stop you from still hoping that you'll be the exception to the rule. even as the story ends, the credits are presented in front of a backdrop of exploding fireworks. and each time the fireworks light the screen, you see a fleeting image of the happier, younger version of the couple. obvious symbolism, yes, but it doesn't mean i don't like fireworks, even if they are fleeting. and loud. and destructive.
i guess that's the rom-com lover in me.